As part of Professional Pensions’ ongoing research into the asset manager buying cycle, we asked a sample of 80 scheme professionals how they go about compiling and administrating their requests for proposals (RFPs). This is what they said…

The RFP is clearly an important document in the buying cycle – and once schemes have put together a longlist of candidates for the mandate, they will usually issue an RFP to those firms. The RFP has several functions, serving as a means of introducing the scheme to the candidates; setting out the performance objectives of the scheme; as well as its more obvious purpose – namely to ask each firm to send through a proposal by which they can be compared and evaluated.

Here are three interesting findings from our scheme RFP research which you should know about.

1. Some schemes tailor their RFP to the firm

As you might expect, the majority of schemes (57%) send identical RFPs to the asset managers they’ve longlisted. A standardised RFP makes sense as, by asking each provider for the same information, the scheme has an objective basis for comparing one provider with another. 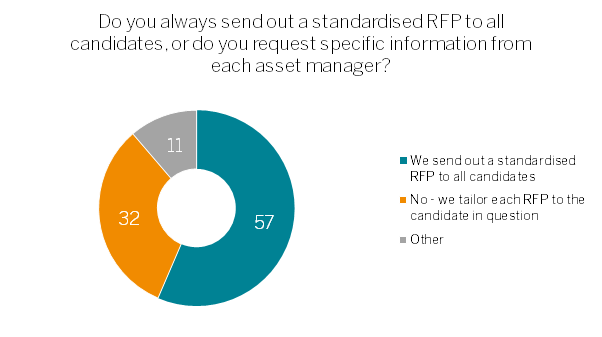 However, our study also found that as many as 32% of schemes will send bespoke RFPs instead. This suggests that a third of schemes are past the stage of making initial comparisons at the time of sending their RFPs, and therefore want to know finer details on the firms they’re considering. As one respondent stated:

“One size does not fit all – and so selective forms make sense”.

This makes it even more important that your firm’s proposal addresses the points which the scheme wants to know about.

Avoid sending a one-size-fits all response.

2. Not every longlisted candidate gets an RFP

If you’re on a scheme’s longlist, you’ll receive an RFP – correct?

Not so, according to our research.  Only 47% of schemes will send their RFP to each longlisted candidate. The majority of schemes (53%) will instead make a choice on which longlisted firms to investigate further.

The reasons for this vary. For one respondent, it was “cost and time taken”. Another respondent explained that “[our scheme] shortlists the candidates beforehand based on an assessment of them by our consultant and a discussion with the chairman of our investment sub-committee”.

Our findings suggest that the different firms have different information requirements and different methodologies at the proposal stage. Most, however, have enough information by this stage to discard some names from the running.

3. Past managers don’t get free passes

A reselection process doesn’t necessarily mean that a scheme has acrimoniously parted ways with its old asset manager. In many cases, the old manager will still be able to contest the new mandate.

But could their past history with the scheme put them at a competitive advantage?

Not where proposals are concerned. 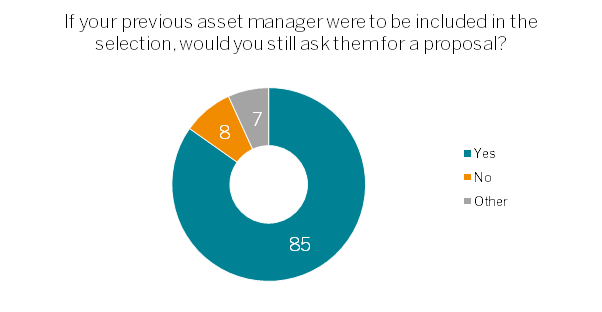 Our survey found that 85% of schemes, if considering their old asset manager as part of a reselection process, would still ask that manager for a proposal.

“It keeps them on their toes” explained one respondent, while another added that “[The old manager] must be considered on the same basis as the other possible candidates.”

So, if you’re an asset manager whose mandate is up for reselection, don’t assume that you won’t need to fight for your seat. And, if you’re a new contender for the mandate, remember that the majority of schemes are interested in giving you a fair hearing, even against their old manager.

Have you got a question about the procurement process for an asset manager? If so, email our Senior Research Analyst, Mitchell Tulloch ([email protected]) with details and we’ll try to include it in our next piece of audience research.